Modern reconstructions of torsion engines tend to use nylon as a replacement for sinew in the torsion springs. Although processing sinew is not difficult, it is time consuming, especially when making large engines. Therefore, in practice, use of real sinew spring cord is often not a realistic option.

Fortunately when studying the performance or construction of torsion engines using sinew is not strictly necessary: all we need is material that is similar to it in it's properties. These properties, such as young modulus (i.e. "stretchiness") or maximum load bearing capacity can be derived from tests. This page attempts to give a rough idea of the relative properties of nylon and sinew cord by comparing two specimens using a low-tech, easily reproduceable approach.

Using a material with similar elasticity as sinew is important, because we can fairly safely assume that the torsion spring ropes will stretch the same amount (percent) regardless of the material used. From this it follows that if our replacement material stretches, say, 50% less than sinew rope with a given weight, it will also store (in general) twice the energy at any given stretch. Also, if twice as much energy is needed to stretch the ropes a given amount, the other parts of the machine such as the field-frames, washers or arms could be overstrained, possibly leading to breakage and false conclusions regarding the construction of the machine. It should also be noted that use of a sinew replacement will not allow us to answer some research questions, such as how much upkeep sinew springs needed, or how labor-intensive making of sinew spring cord was.

Of course, statically loading and measuring properties of different cords will tell us nothing of the dynamic efficiency of the machine, i.e. conversion of potential energy in the springs into the kinetic energy of the projectile; this is a much more complicated subject involving many, many variables, including the material itself, and a real torsion engine is needed to test this.

The sinew cord was hand-made from red deer tendons. Technically speaking, it's a two-ply cord, meaning that two single-plies are reverse-twisted together to produce a single (i.e. a two-ply) cord. This is the simplest possible cordage one can make which holds together without unwinding spontaneously like single-ply would. The exact manufacturing process is described on this page. Although the sinew cord was not perfectly uniform, it was 1,6-1,7mm thick for 80-90% of it's length, with an isolated minimum of 1,45mm and a maximum of 2,1mm.

The nylon cord was taken from a 13mm thick nylon three-ply rope bought from here. The cord that was tested was similarly three-ply, and measured 2,0mm thick when slightly stretched to drive out it's inherent softness.

Both nylon and sinew cords weighed about the same (~6 grams), and were of the same weight per unit of length. The picture below shows both cords after the tests had been conducted:

The loose ends of the sinew cord are a result of the manufacturing process, and do not affect the results in any way.

As mentioned above, the test method was very low-tech. Both ropes were wound around a round steel bar from the top several times. A 0,660kg clamp was then attached to each at the same distance from the bar to straighten the cords: 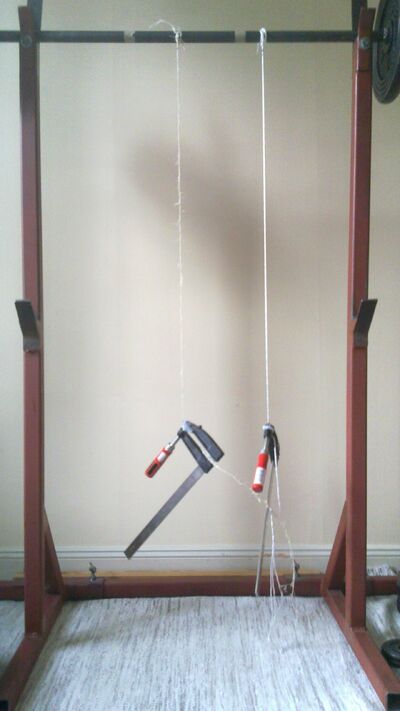 Next a ~85,5cm long section in the middle was measured and clearly marked. The clamp was attached to the lower marker, so that measurements could be taken more easily. Care was taken to see if the clamps would slip under load, and they did not. The ends of the cords that hung below the clamps were tied together to prevent the cords from rotating and unwinding, which would have made them longer and thus skewed the results.

Once all this was done, one cord was loaded with a given weight, then the same weight was moved to the other cord. This way each cord had a few minutes time to relax after being loaded again. Load was increased in 2,5kg steps from 2,5kg up to 10kg: 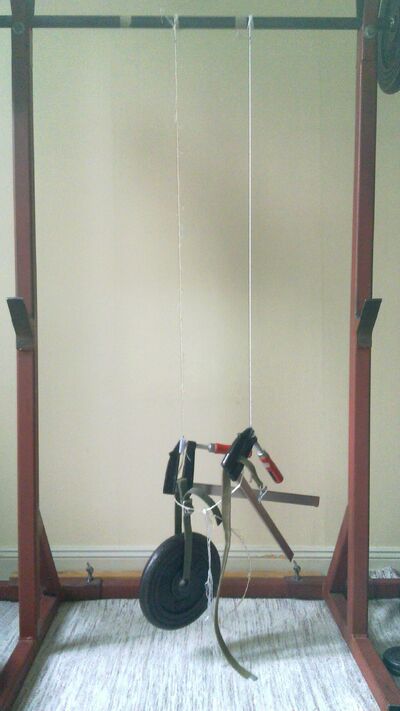 The length of the marked section was measured with the given load. From this the percentual stretch compared to the "clamp only" (0,660kg) load could be measured. After the cords had been loaded with maximum weight (10,660kg), the length with minimum load (0,660kg) was measured again to see how much the rope had stretched. After this, both cords were relaxed completely without removing the clamps for ~30 minutes and the length with 0,660kg load was then measured again to see if any of the stretch was permanent.

Both ropes seemed to have taken a 0,35% temporary set as measured right after unloading of the heaviest weight. Both also returned to their original length after being unloaded for ~30 minutes. The test should be repeated to verify the results.

A similar test was conducted earlier with an inferior (and thinner) piece of sinew cord that varied in thickness between 1,6 and 2,1mm, with a few parts as thin as 1,3mm. The results were as follows:

These test results are somewhat suspect, as the test method was not as rigorous as in the later tests. Also, the sinew cord was not dried while under load as the later cord was, and it took some noticeable "set" (i.e. lengthened permanently) during the test.

Although these tests should be repeated a couple of times to ensure the validity of the results, both sinew and nylon seem to have very similar properties. In fact, if the sinew cord was exactly 2,0mm thick (like the nylon cord), it should in theory be (2,0/1,7)^2 = 1,38 times stiffer. This would mean that sinew springs are actually somewhat more powerful than nylon springs.

In other words, according to these charts, nylon rope should be 2-4 times as stiff as an equivalent sinew rope.

Similarly, in stretch tests conducted by Clift et al (2004: 57) sinew rope was found to stretch almost twice the amount under the same load. The Clift et all study, however, had two issues:

The weak point of my tests is that the cords were loaded very conservatively and they were not even close their breaking points. The nylon cord at least is able to take a 100 kilo load without breaking, according to my tests. I've also noticed that there is lots of easy stretch in commercial nylon rope. I have not tested how much sinew two-ply can take. In any case, my tests should be repeated with higher loads.

It should also be noted that factors not related to the materials themselves (e.g. properties of two-ply vs. three-ply) may affect the results in practice. The properties of sinew also probably vary a lot, depending on which animal they belong to, where they come from (leg vs. backstrap) and how it was preprocessed. Similarly, it's unlike that two different nylon ropes from different manufacturers will yield exactly the same results.

Retrieved from "https://ballista.fandom.com/wiki/Case_study:_comparison_of_elasticity_of_sinew_and_nylon_cord?oldid=6500"
Community content is available under CC-BY-SA unless otherwise noted.