The description of the little ladder (ΛΜΝΞΟΠΡΣ) in the cheiroballistra manuscript is relatively clear. The part describing the tenons (ΛB, ΝΓ, ΟΔ, ΡΕ) is somewhat vague, but we have help from archaelogical finds.

The little ladder from front:

And from the back:

The board ΛΜΝΞ is 24d long and ΟΠΡΣ is 26d long. Both boards should be 2d wide in the middle, and 1,25d wide at the ends. The lower surface of both of the boards ΛΜΝΞ and ΟΠΡΣ was probably curved, as Wilkins (1995: 29) notes. The thickness of the boards themselves is not given, and the part describing the tenons has been debated. Therefore several scholars have arrived at widely different translations or interpretations of the same section of the text:

Marsden's 0,5d for the thickness of the board is completely arbitrary addition. Again, the lack of thickness figure allows anyone to make the little ladder just as strong as is required. The material for the boards is usually assumed to be iron. In case the boards were made of iron, 0,5 d (~1cm) as suggested by Marsden (1971: 215) is way too strong (and heavy) for a gastraphetes-style weapon. A more realistic figure would be 0,17 dactyls (~0,35cm). Although the cheiroballistra text is apparently describing boards made of iron, hardwood could be used instead: 0,75d thick boards should be strong enough.

The manuscript does not describe the exact form of the tenons at all, but it is likely they were similar to those in the Orsova kamarion (Baatz 1978: 11). The thickness of the tenons given in the text, 2d, needs to be added to the length of the boards, or we run into trouble with the little arch being too long compared to the little ladder. If we do add 2d to both ends of both boards we get pretty much the results we want to see:

Although the measurements of the little ladder and little arch don't match each other perfectly, they're fairly close and allow adjusting the distance of the field-frame bars by 3,5d or slightly less, depending on how quickly the boards fade into tenons.

In any case, the boards have rectangular holes at Τ and Υ and round holes at Φ, Χ, Ψ and Ω. Each board had three holes which were the same distance (=equidistant) from each other. Although not clearly stated, the distance between the ends of the boards and the outermost holes should almost certainly be the same. Both Marsden (1971: 225) and Wilkins (1995: 29) apparently misinterpreted this part of the text, placing the round holes at the same distance from the center on both boards. This meant that without an extra pair of holes the rungs would rotate. The correct way is to treat both boards separately and not just copy the locations for holes from one beam to the other. As the boards are of different length, the holes do not coincide, which prevents the rungs from rotating as suggested by Iriarte (2000: 58). Similarly, the hole in the middle is rectangular to prevent the cross-piece from rotating.

The crosspiece (ΤΥ) and rungs (ΦΧ and ΨΩ) are placed between the two boards (ΛΜΝΞ and ΟΠΡΣ) as spacers. All of them are told to be 3d long (not counting the tenons) and 2,5d wide. The thickness is not given, which leaves open many interpretations. Most well-known scholars have made the crosspiece and rungs from thick iron plate. If we assume that the crosspiece and rungs were made from iron, there were only two practical ways to make them with tools and techniques of that time:

Some modern reconstruction are made by boring holes through the (steel) rungs and inserting tenons through them (e.g. Wilkins 1995: 28). This was not feasible in antiquity, where the only realistic method of making holes to thick pieces of iron was punching. While punching through the beams - even very thick ones - is trivial, punching a hole accurately through a relatively narrow but 3d (~6cm) thick piece of steel is not an option. Some modern reconstructors don't clearly state how their crosspieces and rungs are made (e.g. Iriarte 2000: 58; Marsden 1971: 225).

If one really wanted to forge the rungs, the probably the easiest solution would be to use several (e.g. pairs of) simple rivets such as this: 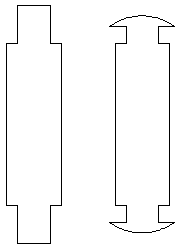 On the left before riveting, on the right after riveting. However, P.H. is not describing this kind of rungs.

And alternative explanation is that instead of iron cross-piece and rungs wooden spacers were used. They could have been the same height as the boards. According to Marsden (1971: 217) P.H. states that the cross-piece was riveted. Wilkins (1995: 28) uses the term "to pin" instead of "to rivet". In any case, there's no talk of riveting (or pinning) the round tenons of the rungs. This would imply that they were left loose and in fact, there's no need to attach them securely: the ends of the boards are securely held together by the metal hoops of the field frames and the middle by the rectangular rivet going through the cross-piece. This allows both the cross-piece and the rungs to be made of wood without any difficulty, their only metal component being the rectangular iron rivet going through the crosspiece and beams. The wooden spacers would be trivial to make, much lighter than their iron counterparts and would even support the little ladder better because of their greater height. The rungs would have had round holes to which round wooden (or iron) tenons were inserted. As the T-clamps which attach the little ladder to the case were attached to the little ladder beams, not the cross-piece, there's little incentive to make the rungs or the crosspiece from metal.

Retrieved from "https://ballista.fandom.com/wiki/Cheiroballistra_little_ladder?oldid=6701"
Community content is available under CC-BY-SA unless otherwise noted.